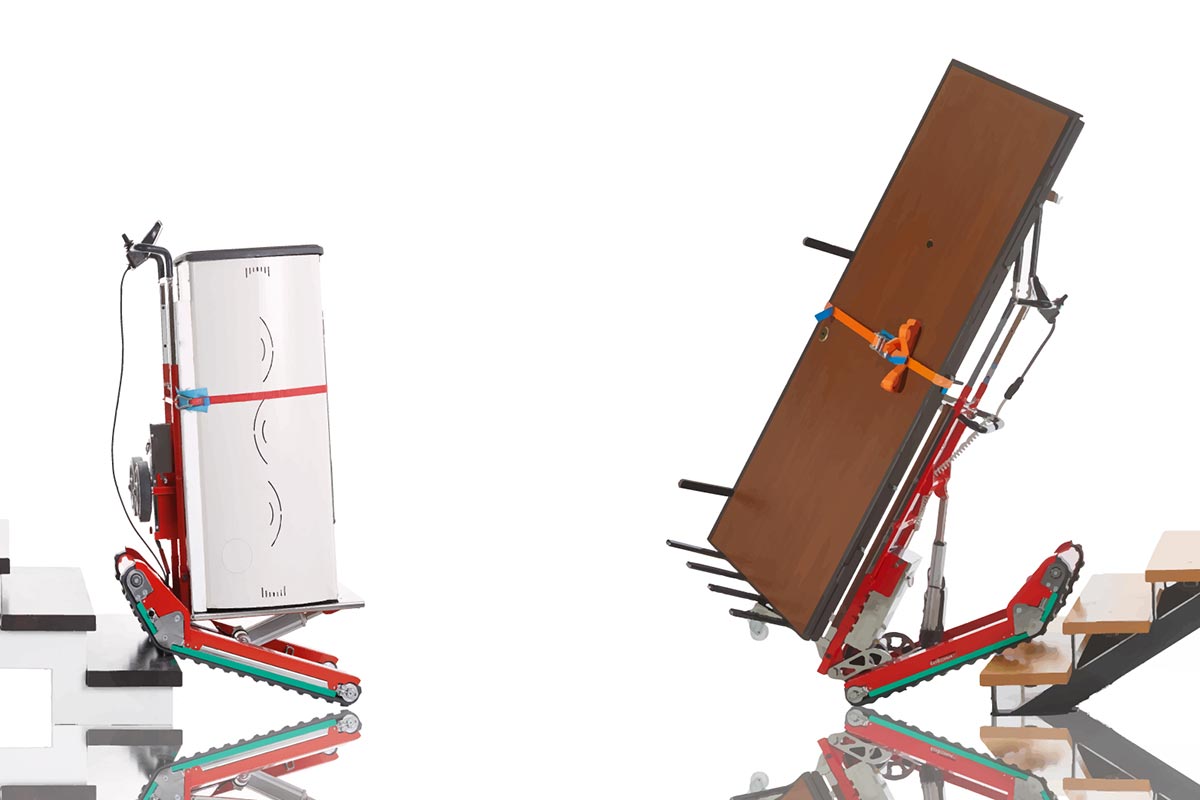 What is a tracked stair climber?

The main difference between the two types of tracked stair climber is therefore their intended use. Tracked hand trucks for stairs are for transporting goods, whereas tracked stair climbers for wheelchairs are for carrying people. The technology for moving up and down stairs is essentially the same, but there are differences in the technology in order to comply with the regulations governing the two different types of transport (goods and people).

Development of the stair climbing hand truck: from wheels to tracks

Tracked stair climbers, on the other hand, are the ideal hand trucks for moving heavy materials on stairs.

The reason for this is that the weight of the load is distributed over the entire surface of the tracks.

In addition, tracked stair climbing hand trucks are almost always electric. This means that the operator does not need to make any physical effort to move the goods up or down the stairs.

Tracked stair climbers have also developed over the years. Let’s take a look at the features and differences between the various hand trucks for stairs with tracks available on the market.

Heavy duty stair climbers with tracks are not all the same, and this is reflected in the different purchase prices.

The following are the most important features of tracked stair climbing hand trucks to bear in mind before making your purchase:

TILTING THE LOAD WHEN TRAVELLING UP OR DOWN STAIRS

It is very important to be able to tilt the load when travelling up or down a steep staircase. The more modern and innovative tracked stair climbers, like Domino Automatic and Skipper, feature electronic technology that automatically tilts the load when it is moved on stairs.

Automatic tilting of the load guarantees maximum safety when moving loads on stairs.

MANOEUVRABILTIY: CHANGING DIRECTIONS AND ROTATING ON A LANDING

Good manoeuvrability is an important feature of powered stair climbers with tracks. It is obvious that moving heavy materials on stairs means being able to manoeuvre the load in accordance with the transportation requirements.

For example, when transporting goods, it may be necessary to change direction, perhaps to pass through a door. Or it could be necessary to rotate the load on the landing in order to enter a corridor. Not all tracked electric stair climbers can rotate on a landing.

These can either have twin grips, or consist of a single handlebar along the whole side from which the stair climbing hand truck is operated. The advantage of a single handlebar is that it can be held at several points, depending on the operator’s height and the length of his or her arms.

The more modern tracked stair climbing hand trucks, like Domino Automatic and Skipper also have a proportional joystick that can be used to operate the stair climber with a single finger. Easy and intuitive.

Speed is relatively unimportant when moving heavy loads weighing in excess of 100 Kg on stairs. Transport on stairs must be safe above all, and speed does not matter. However, it is essential to be able to regulate the speed when changing direction, or rotating the load on a landing, for example.

No article on tracked stair climbers would be complete without mentioning the tracks themselves. Normally these are made of rubber, but they are certainly not all the same.

Tracked stair climbers are the ideal mode of transport for heavy loads. However, their load capacity may vary considerably: from 80 Kg for the lighter, more economical stair climbers, up to 600Kg. Machinery, winches and heavy material always require a high load capacity, in excess of 200 Kg.

The electric motor is another feature to examine carefully before purchasing a stair climbing hand truck with tracks. The more modern stair climbers do not have just one motor, but two independent motors. Twin motors are fundamental for two reasons:

Another very important factor is battery autonomy. The battery is almost always a silicon battery.

Which is the best hand truck for stairs?

Tracked stair climbers are the ideal mode of transport for carrying heavy goods and materials on stairs. However, not all tracked hand trucks for stairs are the same. Before making your purchase, look carefully at their features, such as the load capacity and electric motor, but above all their safety features.

Another advantage of tracked stair climbers is that they can be used both inside and outside building, to carry the load to the stairs.

Zonzini’s tracked hand trucks for stairs are Domino Automatic and Skipper. These tracked stair climbers are extremely safe, allowing a single operator to carry loads weighing up to 400 Kg on stairs without any physical exertion.

Stay up to date on the news

Read the latest news on Zonzini

How to move heavy furniture up stairs

How to move heavy furniture up stairs