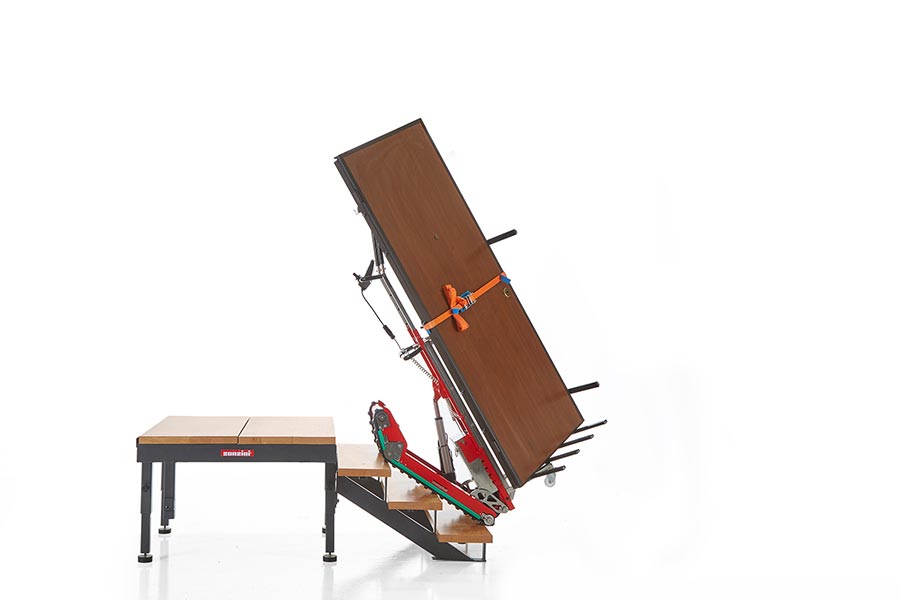 The new Skipper heavy duty stair climber has two independent crawler tracks powered by twin electric motors. It is the ideal electric stair climber for moving goods more than 2 metres in length, such as doors and windows, weighing up to 400 Kg.

The two independent crawler tracks mean you can change direction or manoeuvre the powered stair climber up to 360° on stair landings.

More stability thanks to the new 70 mm-wide tracks

The Skipper motorised stair climber with tracks enables you to move heavy goods also on stairs with irregular steps. The new tracks with their special non-slip mix are 70 mm wide, ensuring maximum stability when moving loads.

The video shows how a single operator can easily load the goods onto the van with the electric stair climber using the tracks, without the need for a loading ramp

The Skipper powered stair climber allows heavy loads to be moved on stairs as well as on any flat surface. So not only inside an office building, but also outdoors. This means you can move the load from the van to the top floor of the stairs completely independently.

The video shows the 360º full rotation on the stair landing, thanks to the independent crawler tracks.

An single operator can easily unload a door from the van

Thanks to the electric/electronic load tilting, powerful electric motors, adjustable base height and convenient joystick, you can move loads weighing up to 400 Kg and more than 2 m in height safely and easily.

The ideal hand truck for moving cupboards, doors and windows

Thanks to its special features, Skipper is the ideal electric stair climber for transporting doors and windows, furniture and tall loads, such as refrigerators.

With this motorised stair climber, a single operator can move extremely heavy loads, such as a reinforced door, single-handedly.

The video shows doors and windows being moved upstairs

The video shows doors and windows being moved downstairs

The videos show how easily a single operator can move furniture, doors and windows using the Skipper electric stair climber.

Moving a wooden table on stairs

Moving a door on stairs

What is the difference between the Skipper and the Domino?

The Skipper is the ideal motorised stair climber for moving very long or tall loads, like doors and windows, on low-ceilinged stairs. It can pass easily through small doorways, where it is necessary to tilt the load.

The video shows how furniture can be easily moved through a doorway thanks to the electric tilting mechanism.

Skipper also allows you to adjust the height of the base: this is an important feature if you need to move items with “feet”, such as cupboards, wardrobes or electric control panels.

The new Skipper electric stair climbing hand truck is a powerhouse of technology and innovation. It is now even more powerful, thanks to its dual electric motor. It is easy to manoeuvre and safe to use. It has excellent autonomy of up to 1000 steps. It can move heavy materials weighing up to 400 Kg up and down stairs completely safely.

Thanks to Skipper’s electric-powered extending/tilting mechanism, you can move doors and windows easily on low-ceilinged stairs and through small doorways.

This makes Skipper the ideal stair climbing hand truck for moving doors and windows. The new 7 cm tracks guarantee stability on any surface, both indoors and outdoors. Thanks to the special non-slip mix used, you can even move goods on stairs with uneven steps. Finally, with Skipper you can also carry loads up and down spiral staircases.

Stay up to date on the news

Read the latest news on Zonzini